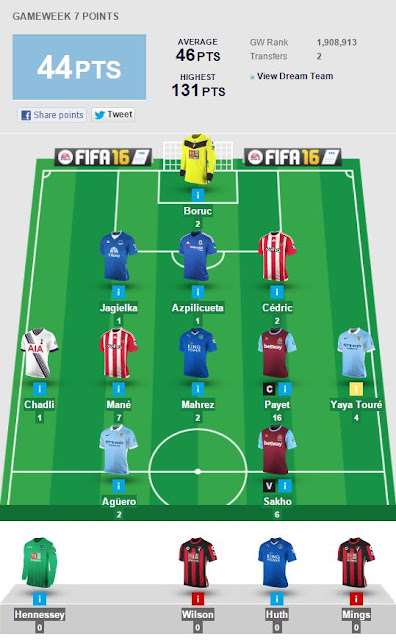 Although I scored a measly 44 points this week. I think I did okay in comparison with the top 20% of players in Gameweek 7. There are a lot of should haves/ifs but I'm not going to be bothered by that.

I made 2 early changes for Gameweek 8 before news broke that Wilson will be out for up to 6 months. Hence, I did not manage to transfer him out as I did not want to take a hit on points. As it is, I'm bringing in 2 players, thus I'll have a -4 deduction this gameweek,

I transferred out Mings for Dann.

Dann has been a solid Crystal Palace defender for the past few games. In addition, he is merely owned by less than 4%. With a decent price and good fixtures. I do expect some cleansheets and if I'm lucky, a goal or two.

I transferred out Chadli for Redmond.

Chadli has fallen through the pecking order and he might not get regular game time. I do not want a player who comes in at the last 20 minutes only to play a defensive role. Hence, I switched him for the more dynamic Redmond who has been red-hot this season.

My current rank lies around the top 15% but I'm aiming to finish in the top 10% after this gameweek.

The obvious choice of captain this week is Aguero. I don't think there is any debate on that. 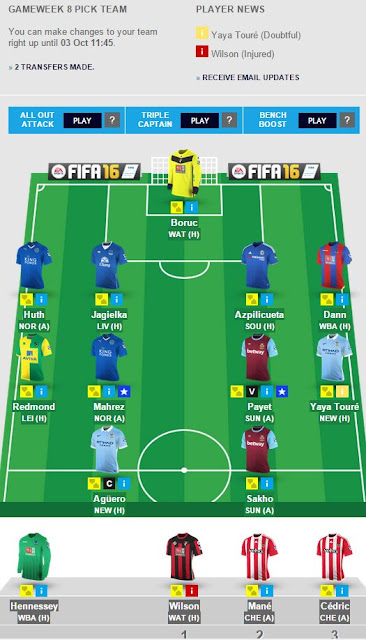 Gamweek 7 - Indie Team for the Win 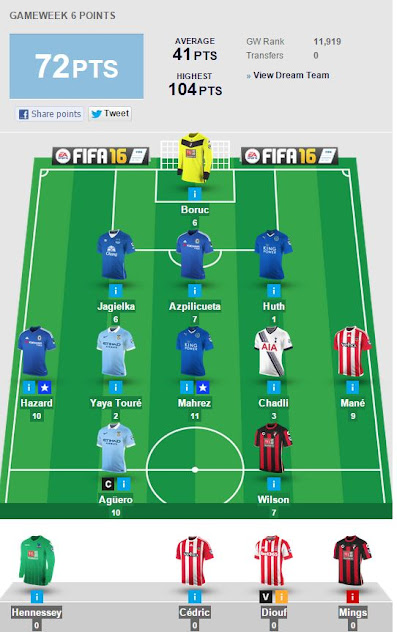 I'm very pleased over what happened during Gameweek 6. It was made even better that my automatic substitutions worked in my favour. Let's hope we can carry this momentum (is it even fair to call it a momentum) over to this week.

I couldn't find any good reason to keep Hazard. I don't think he is a bad player at all, but the exiting morale at Stamford Bridge will definitely dampen his confidence and hunger to win. Playing poorly for the last 5 games, by any standards, forces me to drop him. Freeing him seemed to be the most sensible as he cost the most. I now have plenty of money to make changes to my team.

I have swapped out Hazard for Payet is so hot right now. One of my key strategies was the ride the bandwagon early - which I did for Mahrez. Beyond just an incredible streak of luck, Payet is an on-ball genius with impeccable technical skills coupled with great vision. He not only knows where or how the most difficult pass is, but he also possess the risk-appetite in him to make such passes. I may sound like his wife now so I'll stop here.


I have also traded for Sakho for Diouf because of the possible of injured Diouf and also as an insurance for Payet. If Payet doesnt score or assist, then it must be true that Sakho is doing it all on his own. If both manages to perform well, than hurray for me. If not, I'll have to include the word 'Faith' in my next post for goodluck.

Below is my team for GW7. Good luck one and all. 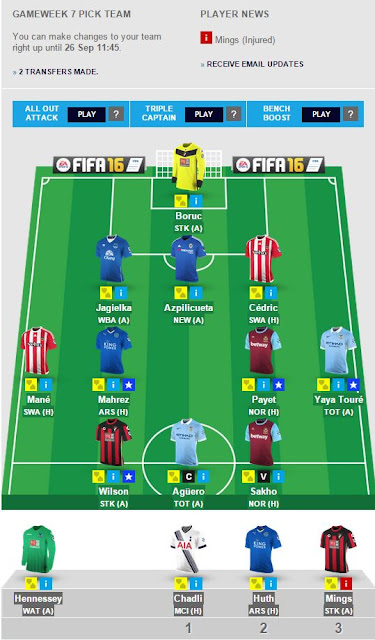 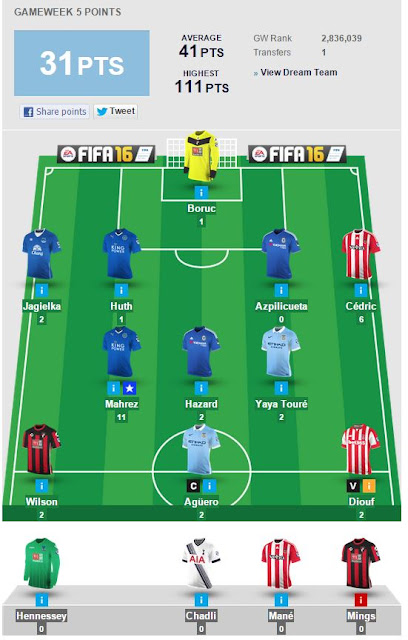 Last week's was nothing short of disastrous. Everything that could go wrong went wrong and it seems like its a common occurrence every week. Rather than blame bad luck, I'm back at it again evaluating fixtures, looking 3-4 weeks ahead to test the robustness of my team.

After looking through the transfer market and not see any immediate need to bring in any ''must-have'' player, I've decided to save my FT and make a change next Gameweek instead. Perhaps I should not term players ''must-haves'' as they have a tendency to flop in recent times.

Players I need to trade out - Mings and Azpi. 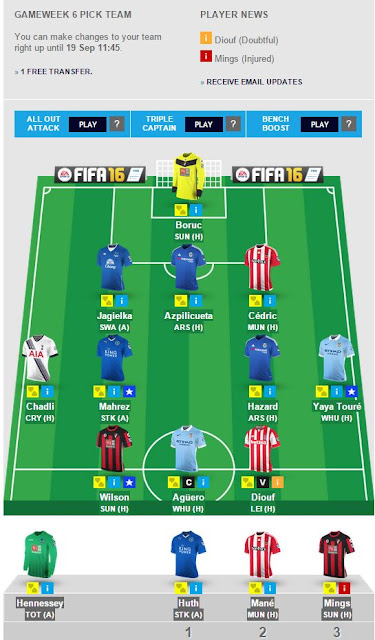 Posted by FPL Warrior at 7:30 PM No comments:

This is my result from Gameweek 4: 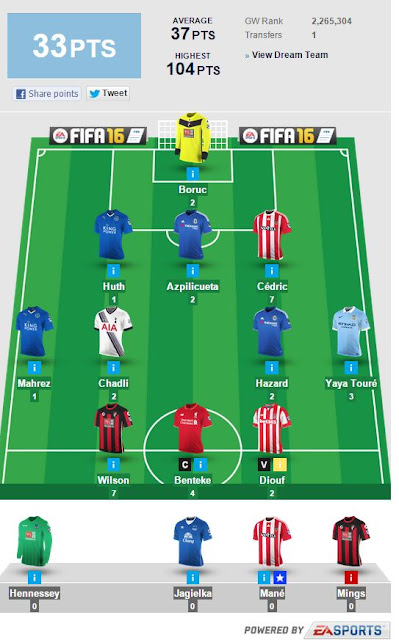 Another dismal week for me. With 2 players from my bench scoring a combined 19 points, I can't help but feel frustrated and annoyed at the same time. My last 2 gameweeks only seem decent because of Wilson who has been single-handedly keeping me afloat.


Let's look forward to Gameweek 5. I'm very excited this week not only because its a new week which promises hope and success, but because I tried FIFA 16 Demo version and I really liked it. I played with Manchester City, one of the 10 default teams, and felt very comfortable using Aguero and Toure. As such, both shall lead my team this week against Crystal Palace. No doubt Crystal Palace has superb form and a defiant defence, but character and class trumps all.

The rest of my players remain fairly unchanged from previous week. I haven't found any reason to make any major changes to my team. If possible, I do want to save my free transfer next week and go for a major change in 2 weeks times.

Trust me lads, for this week matches, just sit back with a beer and enjoy the matches, don't fret over your FPL team. 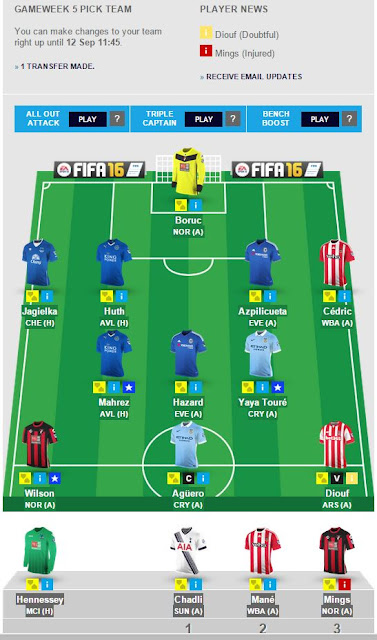 Posted by FPL Warrior at 7:30 PM No comments:

Gameweek 4 - A week to remember

Update: Some of my followers have asked that I show my weekly score and I shall very well do that. 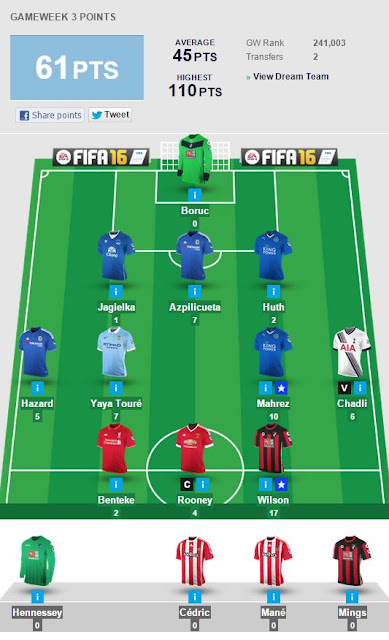 I must say I'm rather satisfied with last week's performance. I'm very disappointed with Rooney especially since he scored a hattrick against Brugge during their champions league qualification.

Looking at the overall robustness of my team (measured against schedules and form thus far), I think this team can take me far. A few minor tweaks I need is getting in a keeper that can be fixture-proof (possibly hart/cech) and a cheap keeper who actually plays (Mccarthly from CP). I also need to trade out Mings for a cheap pound-for-pound defender (what does that term even mean?).

It comes to no surprise that Wilson scored 3 goals last Gameweek. He definitely has the talent and has been the main goal-scorer for Bournemouth. They have a fairly lethal attack force but unfortunately, their defence is pretty bad.

Benteke has yet to fully assimilate into the Liverpool team and the next few games will determine whether I'll keep him in the long term.

Mahrez is on absolute fire. I'll keep it for as long as his form last. Once its gone, he'll be gone from my team as well.

I think all the other players are pretty standard - Hazard racking up an assist as he should be doing; Yaya Toure also notching an assist; Chadli likewise.

With all the above being said, I present you Gameweek 4. I'm going to play as many 'Home' players as I can. The current results are wayyy too skewed towards 'Away' wins.

I'm still tossed between captaining Benteke or Diouf. As of now, its Benteke. But I'll do a quick review and may very well decide to do a last minute switch. 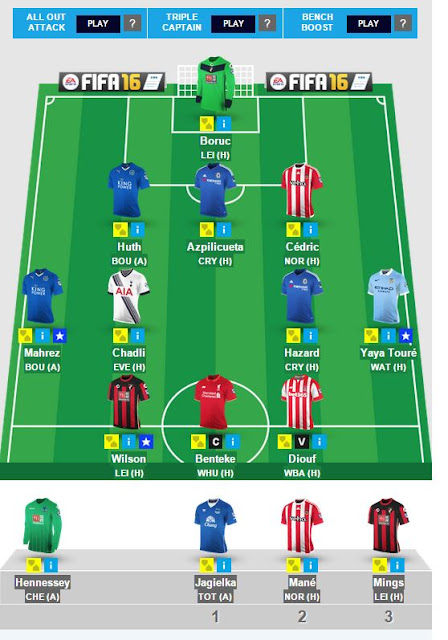 I'm barely in the top 50% right now, a position that makes me uncomfortable as it does not allow me to boast of my superior skills. Having done so much homework with NUMBERS over the last few weeks, I'm definitely saddened but ultimately undeterred by this.

Looking at GW3, I made 2 early transfers and got in Yaya Toure and Mahrez for Wanyama and Walcott. Getting these 2 out were no-brainers but choosing who to replace them became more difficult.

Yaya Toure - He is pure quality. Granted he did not perform well last season, I do believe that this may be his revival season. He may start to take penalities again  and in time to time, nick some balls into the back of the net.

Mahrez - He is cheap, he has assists, he has form and most importantly, I like to jump onto the bandwagon until Leicester proves otherwise. I haven't watched him play yet but stats don't lie.

This week, I'll scrutinize most games and make a fair assessment of all my players.

I may transfers the 2 ''untouchables'' next week should they not perform.

I may regret this but my gut tells me to captain Rooney (has a good record against the Magpies) and that's what I'm going to do. 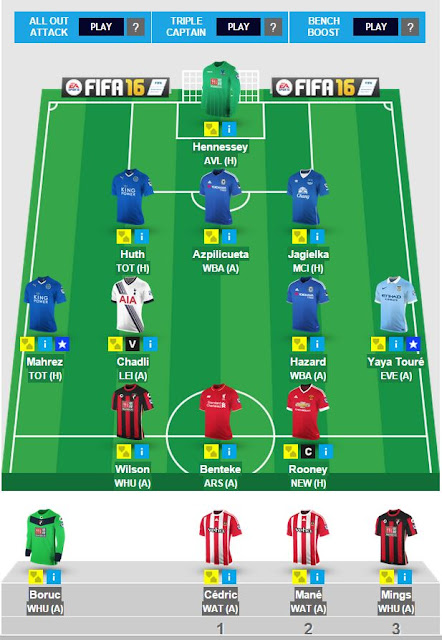 Posted by FPL Warrior at 7:42 PM No comments:


No doubt. Gameweek 1 was horrendous but I'm still not too worried yet. I have a solid team with good coverage in all areas. I'm not planning to switch any players out yet because I'm giving all the benefit of the doubt - first game jitters, and that they'll be able to show their 'true form' in GW 2. Needless to say, some players true form may be perpetually letting in goals faster that you rev your Bugatti, or their form may be hitting the crossbar to show Ronaldinho that he is not alone in craving for nike ads, worse of all, their true form may be carrick-like and pass the ball towards his own goal 99% of the time.

Beneteke is my captain of choice this week and I hope their opening game at Anfield will prove to be a memorable one. I feel the energy at Anfield reviving slowly but surely.

My entire midfield has the potential to do really well this game week as most are somewhat attacking players. Hazard has the hardest game but hazard is the reigning player of the year right? He should be indispensable....for now.

My only regret thus far is bringing in Mings instead of Francis for Bournemouth because he is not in favour to start games.

With all that being said, I will not reveal who I'm bringing in and who I'm axing because I'm not sure myself either. But I do like the fact that I have 1.5 milly in the bank such that I can get almost any player I want.

I present you GW2! 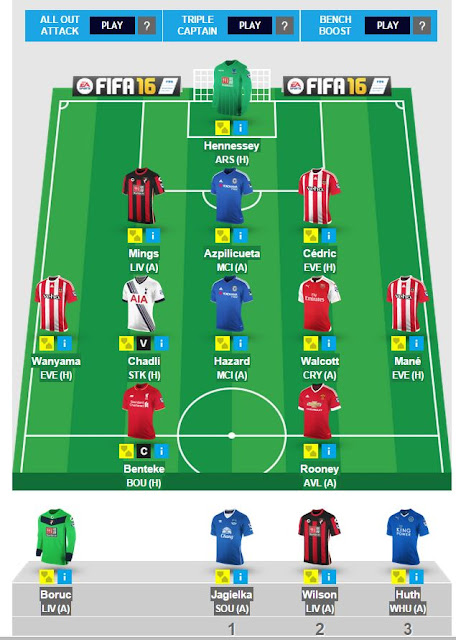 Posted by FPL Warrior at 7:38 PM No comments: